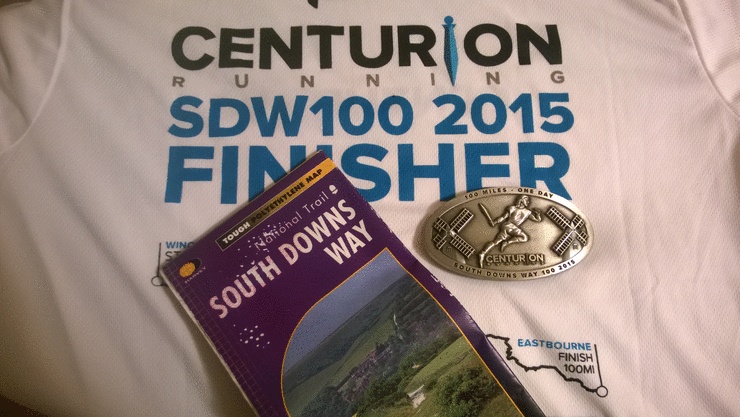 I had a ridiculous number of alarms set in the morning. Somewhat justified paranoia. The taxi was booked for 5am, when I needed to be at the start ~1mile away by 5.30 for the 6.00 start, with the thought that in the worst case I could make it on foot. 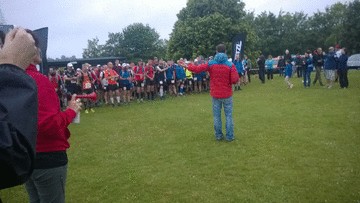 My phone had 5 alarms, my watch had an alarm, the hotel TV alarm was set… so I woke up at the first bell and had time for tea and relaxed morning preparations. Not to go into too much detail but I didn’t have my usual multiple pre-race bowel movements. 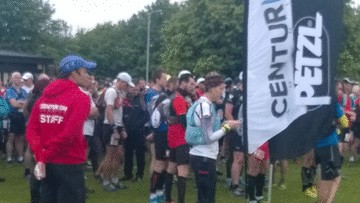 After setting off my drop bags and standing around a field for a while, we were set off. The race initially takes a lap of the field before entering the SDW through a gate. There are few things less spectacular than a 100 mile race start, a bunch of people slowly starting to jog around a field. 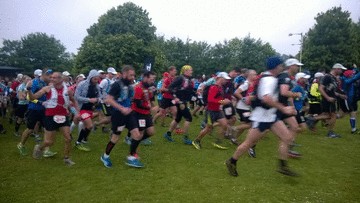 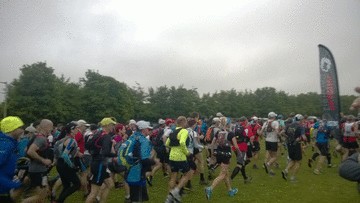 (Note - this report is split up according to timing checkpoints as per official results until the last part which is split by each aid station.)

The SDW100 is split into 15 sections, with 14 aid stations/checkpoints between the start and the finish line. The first two are the most spaced out, at 9.8/22.6 miles. I had some idea of a range of times for the first 2 CPs for 20-24 hour finish range based on average split times (climbers.net calculator).

After jogging out of the field onto the SDW in the middle of the pack, it remained to start at an easy pace, find my feet and try not to get carried away passing people in the first few miles - to run my own pace. It’s the hardest thing to restrain yourself at the start of such a long race, it’s hard enough in a marathon but pulling back to a walk for the initial uphills requires real conscious effort.

I can’t say that the initial miles were very interesting, small country roads and farm tracks; not unpleasant, would be great for a road race, but nothing to seek out. There were some nice little paths through fields and alongside hills, but this felt very much like a taster.

I breezed through the first aid station basically on schedule, and as I came into the Queen Elizabeth Country Park (QECP), my watch showed I was on the 20-hour schedule I had noted.

The climb through the forest track of QECP sticks in my mind, pretty much walking as soon as we came out of the checkpoint, through woods that would be lovely and peaceful if not for the busy road below. Anyway this established the general pattern for most aid stations, of a drop down to a road, checkpoint then climb back up to the main ridge of the south downs.

I say ridge, this is a big long bump across the countryside but from the point of view of being on top, one is usually just running along some farm track or paths across open parkland, without a particular appreciation much of the time.

Somewhere between 20 and 25 miles I was feeling a pain in my hip (I think?) and was grumbling, saying I hoped it would go away at least for 50 miles or so. Well it went away and wasn’t an ever-present aspect of my run, thankfully.

The day had been forecast with thunderstorms potentially overnight up until about 6am, and thereafter overcast. The rain never materialised in the morning, and by this point the day was really beginning to warm up. The overcast sky was at best patchy, and the sun was out.

A Sunny Saturday afternoon, the Downs started to get busy with people enjoying the outdoors. Early in the morning everyone we saw knew what we were running, and was out to wish us off. Once into not silly-early morning we started to meet walkers hiking the SDW, who at least knew where we were running - had a couple of “How far are you running? Crazy!” exchanges. By mid day, I was running past random families and couples who generally wouldn’t even return a “hello” when passing on the path. Quite a few cyclists also travelling along the SDW, particularly in the early stages they seemed to know all about the race: it took me a little time to figure out that’s because they were going in the same direction and so might just have passed a hundred people behind me.

Washington was the 7th aid station but first bag drop. On coming into the village of Washington, one turns down a hill into the village hall - past people going in/out of church I think, I recall some fancy clothes. At this point I sat down with my drop bag - always dangerous - and took the time to change my socks. I didn’t tarry though, and left the hall before I could get too comfortable.

I do remember thinking it was cruel to place an out and back for the aid station at the bottom of a hill. It’s interesting on these out and backs off the trail though, to see the people ahead of you coming out of the CP and those behind you as you leave.

Not sure I remember this section. I was running aid station to aid station, drinking plenty of water as it was warm, drinking a cup of coke at each aid station (I seem to love coke on ultras), and making sure to eat something each time. Watermelon was always good (when hot and thirsty), pineapple was great (seemed to be good for the stomach), something small and savory. Cocktail sausages, wraps, nuts, crisps. One thing I can say without reservation, the aid stations were great.

I had a drop bag at Clayton Windmills but only took the gels from it to replenish my supply. From Washington onwards I started taking gels periodically, initially by distance then later on midway between each aid station.

On the way into Clayton Windmills I passed 3 runners on their way out of the aid station. From this point onwards things seemed more of a race; saying that, still friendly rather than overtly competitive, I was more interested in the company and exchange of a story or two than trying to gain positions.

Somewhere around 75 miles I found I felt energised, “less than a marathon to go!”.

I picked off each of these 3 runners in this section, catching up, chatting then finding my pace was naturally pulling ahead.

The route to Southease climbs over the railway by the station bridge (interesting), I think making it 2 railways and 2 rivers crossed.

I had been counting down to this point, only 3 sections left. 3 is a managable number, right?

The running was good here, nice and grassy and good going, but I was really just counting down the kms until the next checkpoint.

Coming into Alfriston was strange, a town with narrow streets, running past people sitting in the pub looking out at an oddity passing by.

Climbing out of Alfriston was a lane with dense foliage either side, and I found I needed to fish out my headtorch earlier than I would have in the clear.

Got away without much night running at all this time!

When I made it onto higher ground I found that it was foggy. The running was fairly good but I had to run with headtorch held at waist level, scanning back and forth for any turns. Enchanted evening…

I descended the steps from the checkpoint, turned along the road and started looking out for my turning. About half-way there I met someone coming the other way, who said he went wrong and asked where the checkpoint was. After directing him to it and continuing, I didn’t think much of it, assuming that he’d just missed it as he came through the village. As it turns out he was originally in 1st place and lost about 40 minutes being off route, I’d actually passed a marshall on my way into Jevington who was asking about what runners I’d seen, clearly looking to find out what went wrong.

I climbed up the track to the trig point marking the high point before the descent into Eastbourne. At this point I wasn’t saving anything, I was running part of the track uphill, but mostly settled into a run 10 paces, walk 10 paces rhythm.

Sooner than expected the trig point came into view, a tent with marshalls and if I recall correctly a couple of lively dogs. They directed me towards the descent path - all well marked for the darkness - and I was off. They recommended I enjoy the view, it would be a good view over the town apart from the fact it was dark and foggy.

I ran down the path to town as quickly as I could - a proper narrow trail with roots and stones and surrounding vegetation, which was a challenge to run fast by headtorch after the best part of 100 miles, but I went as hard as I could, certainly not in the least cautious.

The chase is on

As I reached the bottom of the trail and approached the roadway, I passed a guy who shouted that I was just 2 minutes back off 3rd place, I could catch him. I replied “thanks but that’s optimistic”, but all the same I put the foot down.

My legs may be tired and blisters sore but I had been closing strongly and now I really went for it. It will take forever to recover anyway so may as well give it everything. As I ran down the pavement, first down some side streets then turning onto a larger road, I felt like I was in the latter parts of a 10k, breathing hard, thinking about form, engaging calves and running more on my toes. It felt good, hard but good.

The turn came down onto a path curving back around the college/hospital and still no sign. I think I passed someone who was out walking home from something, an odd sight. Then curving around a corner, two runners ahead! I kept pushing the pace, trying to gain ground. After a little while, one of the runners (not sure whether it was the competitor or his pacer) looked behind and saw me, and accelerated.

I continued to push, gaining some ground but not enough. I didn’t know how tired he was, it could have been that there was no gear to move up, but it seemed he managed to summon the energy to hold me off.

I followed him onto the track, giving it all now, and we proceeded to run a hard 400m with a hundred miles in our legs. My watch suggests I ran about 90s at best. 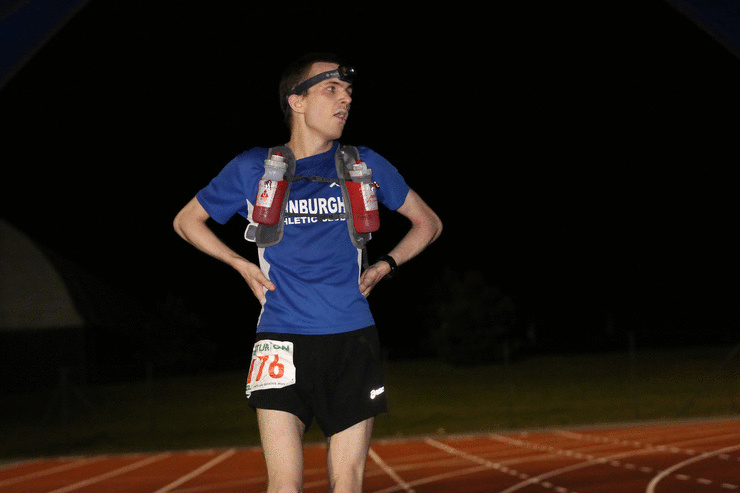 Graham O'Loughlin finishes #SDW100 third in 17:12:10, awesome finish 32 secs ahead of Nick Wolverson who looks like he just ran to Tesco.

I gave it a good shot, but in the end I finished just over 30 seconds behind. Not much after 17 1/4 hours, but enough to keep me in 4th. I’d like to think if I got the info that the gap was so close earlier, before the last climb I could have pulled back more time and maybe moved ahead, but certainly there was nothing to be done in the space available. 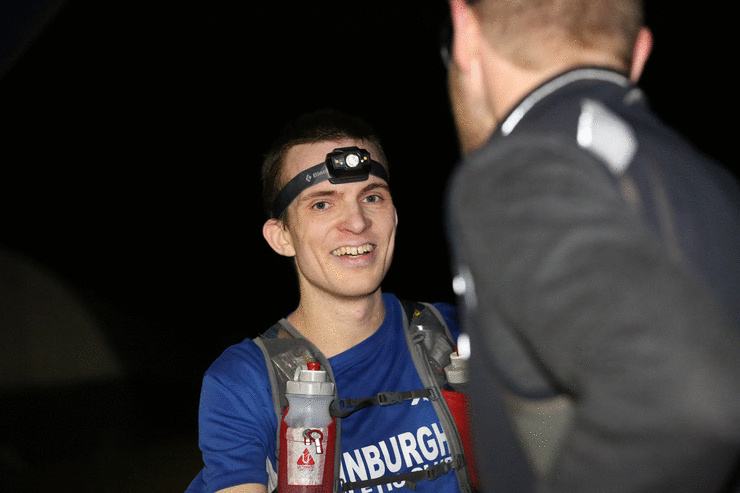