I asked myself, how many races is it sensible to run in the 10 days before the year’s big target event? You may be surprised to know I passed on some - the Haddington 10k on Saturday afternoon, and the Meadows 5k next Wednesday.

Wednesday turned out to be a stunning sunny evening. Usually I’d think about running there from work and then home, but working out about 17 miles and starting to taper for the SDW that seemed like a bad idea. I compromised with running there and getting the bus home, though when Laura offered a lift on the way past I was happy to cut down the miles even more. 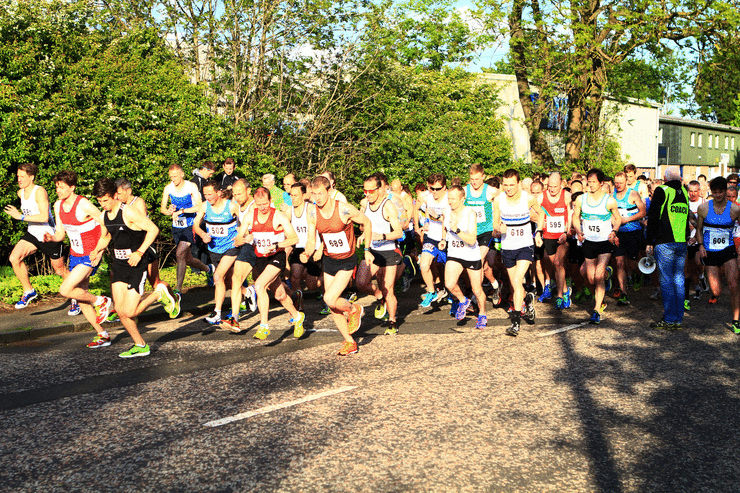 We started off downhill into the wind, and with Pat G. and co. off the front, a decent sized group was forming at what seemed to be a reasonable pace. I probably should have backed off when I was running beside Colin but I chose to believe he was starting slow. In any case there were a couple of familiar faces and I hoped the fitness would prove to be there.

Somehow I found myself at the front of a group taking the wind rather than hiding in shelter, and nobody seemed to feel like taking it back. Explains the apparently modest pace. I was happy to be overtaken again before the first corner.

A mile gone and some hills came into play, and I realised I went out a bit hard, tried to keep going steady and stick more or less with the people I was beside. 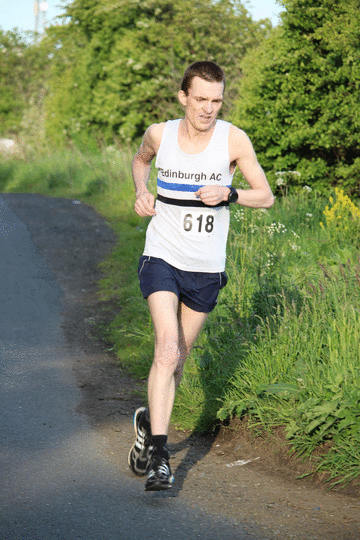 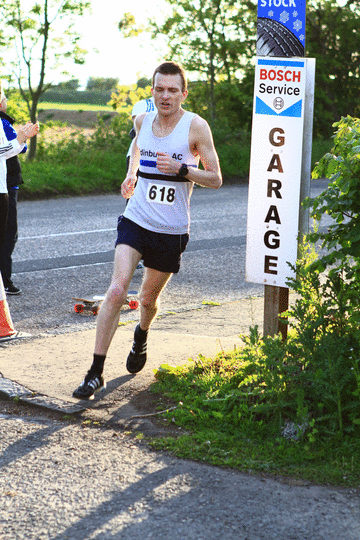 I thought I must have passed the 3 mile mark when the marker came into view. By this point I felt done, no more race in me. Apparently my legs thought it was 5k and not 5 miles.

By 4 I felt I was slowing, just trying to mitigate the loss and keep turning over. The last hills were tough going, seemed like I was jogging and making tough work of it. Finally there is a long straight, where the end feels in sight, a turn down back to the main road, and the home straight. Nearly there. Nearly. Still not quite there, longer than it looks…

Edinburgh parkrun. Forecast 50mph wind meant I had to go down and battle the elements.

Actually getting to Cramond was the main problem, good half hour running against the wind in the morning is somewhat dispiriting. The parkrun itself was not as painful as might be expected, went out at decent tempo but able to exchange a few words, after turning into the wind passed 1 runner who was moving backwards, and had a bit of back and forth with a runner I recognised from races past; I tried to do my bit and take a turn in the wind but in the end I couldn’t even hang on drafting.

I couldn’t miss the Portobello beach race, one I had never done before even though it is so close to home. Less than half an hour jog from house to the start and home afterwards.

After watching the kids race down the beach from a distance, the start drew near. It was a sunny day, but somewhat windy. Not as windy as Saturday, but a decent westerly wind all the same. So the race was 2 miles into the wind, 2 miles back.

The race starts along the Prom, and David Limmer wasted no time in getting out in front. Nobody made the slightest move to follow. In fact it seemed there was quite some hesitation in getting started, nobody wanting to make a move, but slowly a group formed at the front. The race was moving onto the beach earlier this year due to the busy prom, so soon we were onto the sand (I hope they keep this route). 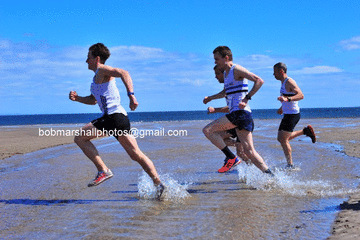 We were in a group of 4, ticking over and running against the wind. I was keen to keep things under control after Wednesday, so I was sticking with the group and trying to spend a good amount of time hiding from the wind, without taking the mickey; though with the wind angle and our positioning, it wasn’t easy to get much respite anyway.

It seemed a long way until the turn. This was right at the end of the beach, though I had the fortune of not being entirely clear on how far this was going to be until it was visually obvious.

Somehow at the turn I missed the move, and there was immediately a gap between me and the 2 ahead. A HBT runner, and Sean who I finished right behind at the CAAC5… The pace had picked up considerably for the run back with the wind, and I felt like a switch was thrown from comfortable to hard running. I picked up the pace, and maintained the gap.

As we flew back down the beach, I tried to pick the best line back to the end of the groynes, with the benefit of the 2 runners ahead of me, attempting to improve on their route. I was chasing hard, pushing myself, and didn’t seem to be making any headway, but at least not losing ground either. Then for about the 2nd inbound mile it seemed as if I was making some progress. As we rounded the last groyne running through a couple of inches of water, and took a diagonal line up to the exit from the beach, I seemed to be gaining real ground. 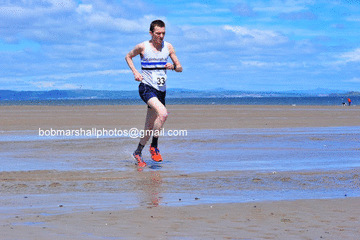 Then there was soft sand, and things went into slow motion, legs going nowhere. And the ramp off the sand, so steep! I had a good go at catching up in a sprint finish along the short section of the prom to the finish line, but there was too much ground and not enough speed, when it was clear it wasn’t possible I slackened off a little before the line. 4th in 25:45, behind Sean in 25:42, 2nd place not too far off at 25:31 and 1st another story 24:34. Clearly the run back had been solid as there was a minute clear behind me.