After the somewhat lacking weekend of the Road Relays and in view of upcoming events (London and more) I hoped I could get some miles in this week and start to feel a bit better.

I had not hit a 100k week yet this year, which was not a good sign in training for longer distances.

I may have overshot.

Still feeling a bit sluggish since the weekend, took an easier track session.

Back to some mid-week semi-long runs in panick-mode preparation for longer summer events. Being before the Easter long weekend, my work was having a Beer, Pizza and FIFA session. Not having any interest in FIFA whatsoever, I nevertheless grabbed a social beer and pizza slice before heading out for my evening run. 28k at an easy pace made a good start to the weekend. Around Arthur’s seat, to Portobello, Musselburgh, and home. Long enough even with these newfound late nights to get home in the dark.

The good thing about Saturday races is that they can fit into a training weekend well. The plan this weekend was to run the Dunbar 10k in place of my usual parkrun, for 20k overall with 10k race effort (but not necessarily going all out to potential injury). I headed off in random directions for a 5k-ish warm-up. As I became somewhat disoriented attempting to make my way back to the start I was beginning to wonder if I might use up the remaining half hour trying to find the place again. Confusing housing estates. 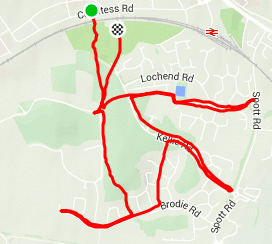 We set off and I fell into a comfortable pace with 2 groups ahead of me forming, one of maybe 3-4 with Callum’s Edinburgh vest, a 2nd larger group not far behind. I wondered whether I was starting off too quickly for my somewhat heavy legs or not, but I had to move forward past a ‘tri club’ shirt on principle.

Getting out past the first few turns towards the 1k mark I might have ended up in no man’s land, except that Neil (EAC) was going for a ‘tempo’ effort for around 36:00, which was the sort of time I had in mind. This gave me good pacing company for the run, keeping the pace up but steady, gently easing forward through the field. The only issue with the set-up is that when we hit the course’s main hill, I needed to put in a hard effort to keep up with Neil, who was drifting forward, and on my not too fresh legs, unsure if I would later pay the price. I knew that if I let him go things would be harder overall, so I pulled back along-side and moved up a couple more places.

We enjoyed some beautiful views over fields towards the coast as a distraction from the wind and effort. Coming up to the cone turn, I was warned it was slippy by the marshall, yet managed to execute a groin-stretching slide as I made my turn all the same. By this point Neil and I were in 3rd/4th place, side by side. Coming back from the turnaround, it was clear there were a heck of a lot of people not all that far behind, so time to keep pushing consistently. 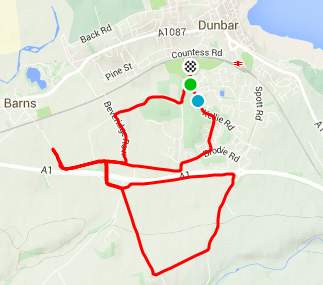 Clearly I wasn’t racing 100% all-out, as I found some breath to cheer fellow Edinburgh athletes heading the other way. As I hit 8k the legs felt heavy, but given they felt like that early on, not a problem. In fact it felt good, running strong. As soon as we hit the 9k mark Neil pulled away, and while I initially tried to hang on the increased pace was about as much as I could handle. I was sure that if I were to get even Neil still had more left to pull away, and at the same time I was not sure I could sustain even the current pace to the line, so I let it go - not wanting to do myself an injury and compromise the next few days training.

Dunbar was a hard effort but I felt good afterwards, so I was confident that a Sunday long run was on the cards. The weather was looking good, and I was inspired to run from my house to the Craiglockart group run, do the 16 mile route and hopefully run home.

Kitted out in t-shirt, shorts and race vest I headed up the water of leith Craiglockhart. The sun was shining, the wol was beautiful and I was singing to myself as I ran along. The run up to the reservoirs was not easy on the old legs, even given a fairly reasonable 4:30/km overall pace, with a sizeable group of 7-8 for much of the way. As could be expected on a sunny Easter Sunday, the countryside was beautiful. I did find it less distracting than could be, finding the running quite tough. The longer we were out there, the hotter it felt in the sun. By the time we came back through the tunnel around Colinton Dell it seemed divinely cool.

As I parted to run back home through town, I was telling myself I’d stop to pick up some more water (having run out before coming back into town), but it never quite happened. The idea was postponed, and I savoured the coolness of the shade of buildings. Queen street in particular. I looked forward to the banana shake/smoothie I’d gulp down when I got home.

Came home in about 3:20 for a 3:15 or so marathon. And had to go out shopping to get the shake ingredients…