My run up to the Canalathon 50k this year was somewhat mixed.

I entered well in advance as I enjoyed it last year. As 2015 plans coalesced, it came to be that London was the first big goal, so the Canalathon was going to fit in as a training run towards the peak of my marathon build-up. Then as I was out injured at the start of the year, I was considering having to withdraw. Then considering whether I could jog around easy.

In the last couple of weeks it has felt like my fitness was suddenly coming back, and in particular a long run at about 4:20/km pace made me think maybe I should give it a proper go, shoot close to my 3:32 from last year.

Having skipped out on the Sunday and Monday runs with a banged up knee, I was managing to taper from a base of little mileage. A few 45-minute runs through the week and I felt good, unable to stop myself running fast. Fresh.

A sleepless night in my hotel room, I was restless, and as the night went on paranoid about missing my alarm and the start. At least I wasn’t relying on the hotel’s wake-up call, which when booked for 6:30 was given at 5:00…

Standing around at the start I was again restless and eager to be off. Slightly chill with a few layers on, and then stripping down to the vest at the last minute, eyeing up the sun breaking through the clouds.

The call ‘readygo’ came and we were off around a lap of the car park before moving onto the canal. I immediately went off the front, legs a little eager to be in motion. As I turned onto the canal, I joked “is it left?”, as the canal starts off to the right. A weak joke. I knew from last year that the race runs along the near side of the canal for the first section, and proceeded to lead the pack down the footpath. There were shouts from spectators - unfortunately, the joke was on me as there was a diversion due to some construction work, and everybody who followed me had to turn back to cross the bridge to the far side of the canal.

Happily my only navigational error of the day. 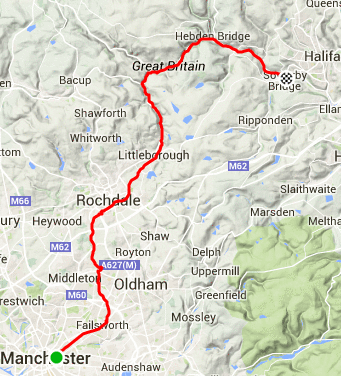 About a mile in I was talking to somebody who said they were aiming about 4 hours. As I was looking for 3:3x range it’s fortunate he dropped back shortly after. I then found myself on my own for the rest of the race.

I had a pace in mind of about 4:15/km, maybe 3s either side, and I thought I was doing quite well with that. I felt locked into the pace, relaxed and consistent, cruise control. Apparently I was going as fast as 4:05/km at times, but still my watch was showing an average of 4:14 or 4:15 and it felt good.

At the 10 mile aid station I had a Jaffa Cake.

By the time the 20 mile mark was approaching, it was no longer easy, I was maintaining the pace but not enjoying the experience, counting down the time.

I went through the marathon at somewhere around 3:01, a few minutes shy of the previous year (by my reckoning anyway). And on hitting the marathon mark, I pretty much hit the wall. Things were not good, I just wanted to survive until the end.

Last year I picked the pace up from the marathon mark onwards, really pushing myself and hammering out the last 5 miles or so. A world of difference.

47.5k. Only 2.5k to go. Nothing. But I honestly didn’t think I could jog to the finish, never mind maintain a decent pace. There was absolutely nothing in the legs, my spirit was broken. 10 or 15 minutes was an eternity. If there was somebody behind me I imagine I’d say well done as I watched them float past. A mental battle ensued to keep slogging onwards. I walked under a bridge and that was allowed because it was a bridge: I’m not sure why that’s allowed, I suppose less likely to fall in if somebody appeared coming the other way. I remember the pleasant coolness of the air under that bridge.

Finally I rounded the last corner, tried to straighten myself up and look almost human to jog in to the line. Victory - 1st place, mind over matter of the final slog; and yet failure, to understand myself and to crash and burn.

That was a very dull pace-focused view of the race, sadly to an extent that was my mindset at the time too. Regardless of the painful experience, again the Canalathon was a great day out:

Sitting here writing this mid-week, and I haven’t experienced the expected DOMS, or really any effects other than another restless night of sleep on Sunday.

Not sure why that is - not able to run hard enough for long enough to beat myself up?

So I’m not quite sure where I am. Deciding whether I want to reconsider and run London (without any proper buildup), or skip and concentrate on Summer goals.