I’m not sure when it happened, but it was clear at the start of 2014 that I was taking running a little more seriously and getting generally faster. My stated goal was ultra-marathons but I was training more, longer long runs but also greater overall volume and adding in speed work. I decided I wanted to set a PB at every distance - that is, every ‘standard’ distance which I had run before.

This eventually led to the title of this blog, as I found myself training for a 100 mile race (which admittedly does not appear on the below list) yet setting what I think was a respectable 1 mile PB.

Since I had a particular focus of setting PBs across all distances, and in 2014 have clearly been in the shape of my life (and not from a standing start in either regard), I was delighted to be awarded with the Edinburgh AC trophy for most improved athlete. 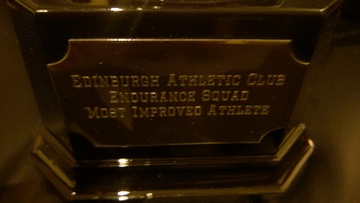 Some of those distances I ran several times in 2014, here are collected times, chronologically apart from 5K which I can’t be bothered re-sorting: