A solid week of training despite an inauspicious start; a “proper muddy” xc race to get stuck into; a bit of a failure of spirit.

Bumpy start to the week

I decided to start the week with a short run to work via Inverleith park, which was a new route for me. Running around the perimeter of the park, a bit muddy for my grip-less shoes but a change is a good as a rest as they say.

The perimeter path I’m running along crosses a dual-use path entering the park, not quite at a right angle, behind a cover of trees. After crossing a road and encountering an intersection where you don’t have right of way, would you be cautious? Or would you come flying along at speed hugging the inside of a blind bend?

Oddly for a cyclist/pedestrian collision, neither of us fell over even though it wasn’t just an incidental clip - in fact it was basically head on and we kind of bounced back. I was not happy. 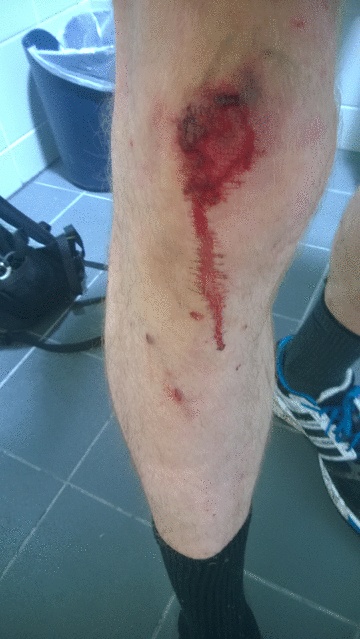 The cyclist quickly rode off leaving me standing looking at my leg and knee, cursing and trying to work out if I could even walk. Well eventually after considering a cab or seeking medical attention I made it to work at a walk, with an incidental purchase of frozen peas.

It wasn’t clear on Monday whether I had anything seriously wrong, but in fact the most painful place on my calf became less painful and didn’t even bruise, though my knee did start to feel a little odd.

To my surprise I made it to a track session on Tuesday, and got a good solid session done (10 x (200m+800m)). Wednesday morning reminded me how taxing it was, Wednesday night fine, Thursday session short with no after effects.

We arrived at the academy to an oddly empty car park, and were soon joined by a football team. Oops, wrong academy, try that again…

We arrived at the academy to find a running track encircling a field full of club tents, and the sight of boys and girls finishing their races covered head to toe in mud (and for once I don’t exaggerate). There were some brown vests that started out white.

A jog around the course made it clear this was not a flat quick grassy affair. Flat mud, hilly mud, big sloppy puddles of mud…

A start that as expected was a confusing mess of elbows as the field moves from a wide start around a couple of bends across a narrow bridge and onto a narrow path through the woods. I didn’t move out too fast, but was quite aggressive around the first lap moving up past people. Jump a place or two when the path widens, and slot back into single file for the narrow uphill climb. I feel sorry for the guys that I dodged past and then slipped in the mud and flailed in front of.

That worked out quite well last week at the Braids, but it seems this time I pushed a bit hard to move up the field, for the 2nd two laps were a struggle just maintaining position. Still running hard throughout, but the uphill into the quagmire seemed like I was so slow I was going backwards.

Thought I was having a hard time, but after hitting the last sharp little bump I found a sprint finish, if only in case the guy I just passed had a kick.

Got up in plenty of time intending to head over for my regular sunday group long run. Went back to bed. Didn’t run at all all day.