I took Friday afternoon off work and travelled down by train and bus to Rothbury for the St Oswald’s Way Ultra. The race didn’t start from Rothbury, in fact it was the 100k finish (the race being 50k/100k/100Mi). The race started at Holy Island, but due to the limited accommodation there I was taking up the availability of an early morning bus to the start.

I enjoyed a tasty 3-course dinner, had a wander around town and worked out where the bus pickup would be in the morning and took an early night. Plugged my phone in, set the volume to max and set 5 alarms to ensure I would be up in time to get to the bus. 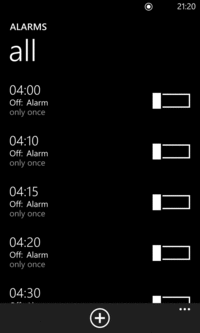 So I woke up with a shock at 5:30. No idea what happened with my alarms, whether they just failed to go off (unlikely), I turned them off (all of them?) or just somehow slept through. Without my own transport, or any other way to get there, the event was a write-off.

After a bit more sleep I had the consolation of a cooked breakfast and being right beside the St Oswald’s Way with running kit and map. I decided to do an out and back along the route, the section that in the 100 mile race would be in the dark.

The idea was to turn back after about 4 hours, and then be in good time for buses and trains home. The first section was up on moorland that could have been anywhere, it felt so familiar. For the race I had been worried that this section would involve some climbing but I think I was mislead by the elevation, it was really nothing at all. Very well marked by the event team, I would have been making false turns and a slave to the map going by the official signage. 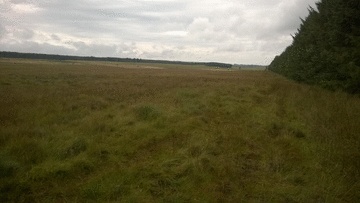 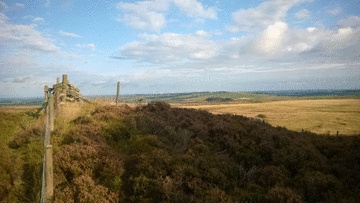 After going along forest tracks a road is crossed, marking the transition into farmland. This is where I’m glad I was out for a leisurely daytime run and not racing into the night, as even with the benefit of light I went wrong once. Signs that direct you into a field are never my favourite thing on a marked trail: it’s never clear what direction to head once you’re in it. After going wrong I turned on my GPS navigation and could follow that easily. That might have worked OK in the night if I had the batteries for it - I’ve not quite worked out what to do about my Ambit’s battery life for longer events, the 1 minute GPS sample interval doesn’t seem great. Maybe don’t do them?

The farmland was interesting at least for its inhabitants. There were plenty of sheep, who seemed quite keen to herd themselves when I ran past. Some horses, which were both curious and skittish (got surprisingly close, too). A pig, which…well just lay there to be honest. And quite a few fields of cows, the majority of which were very curious (one lot couldn’t give a damn, not sure what the difference is). I’m used to the turning head as you go down the road past a field, but as I crossed their fields there would usually be one or two cows on the periphery who would be curious and start trotting over (do cows trot? whatever they do.).

Went through a number of places which were marked on my map, which generally turned out to be approximately three houses and a postbox. Great Bavington also had a bench and an informational display. Sadly I never did find out “What’s Great about Great Bavington”, as it had been erected in the middle of a patch of nettles. Or to be more precise I’m sure it was erected on bare ground and the nettles came later, and nobody cared enough to garden them away, but the result is the same. I’m pretty sure Great Bavington is Great simply because it is or was at one point bigger than Little Bavington.

End of the day

I’m not sure if I could have run 100 miles yesterday, it felt tough going for as much as I did. Was tired before even the marathon mark. Whether it was the heavy taper (barely ran at all this week and I’m not sure it helps), the mental side of things, or the energy sapping ground underfoot. I probably need to run more off road (and strengthen up my ankles and calves). Saying all that, I’m not sure I felt much worse at 70k than I did at 30k, other than bad feet from having wet shoes for 8 hours.

The other bonus from not running the race (and by this point I was trying to look on the bright side) was as well as being able to make the train home, I even had time for a couple of pints back at my lodgings.

While not the trashing that I assume 100 miles would be, I still felt somewhat worse for wear today. Perhaps went out for too quick a run this evening too, not sure where that came from. In any case assuming I’ll be fresher than previously anticipated I’ve entered the Linlithgow 10k for next weekend.